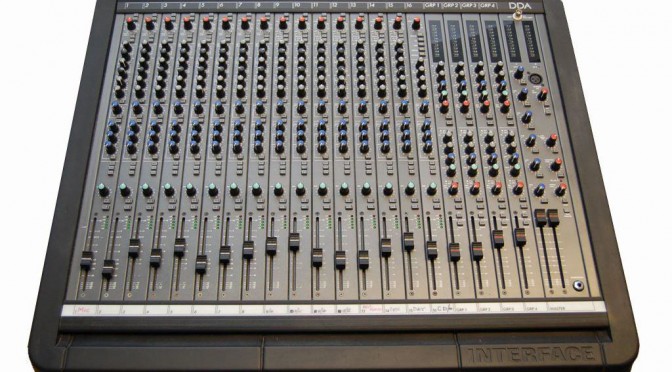 David Dearden is widely respected in audio design circles, and to my mind is a far more important innovator than either Malcolm Toft or John Oram, though reticent when it comes to singing his own praises. Having designed several of the classic Soundcraft desks in the late 1970’s and 80’s, he struck out on his own with DDA consoles and started with the huge AMR24 – an extremely large desk that offered an alternative to the monsters being offered by NEVE and SSL in the mid 1980’s. However, he saw how the industry was changing when others failed, and designed a series of more compact consoles that anticipated the need for good sounding, well build, low-service modern consoles ideal for smaller rooms or home producer suites. If you find one in good condition, you won’t be disappointed.

For example, ten years ago I advised a new college to invest in a used DMR12 (DDA’s clever twist on a split console, with twelve mic/line inputs and 24 line only monitor inputs with full EQ and auxiliaries), and although the college has relocated twice and is now one of the most successful institutes in London with hundreds of students, that desk is still going strong with a minimum of repairs or service.

Other desks in the series include the QMR (as used by Nicky Ryan to recording the multi-million selling Enya albums). Now available for peanuts, these superbly designed desks remain as relevant to the modern recording suite as ever, despite being trashed in bone-headed recording chatrooms and forums by ignoramuses who’ve never been within a mile of using one and who rave about shoddy modern travesties that rely on big knobs and hype to generate sales. Let them whinge – if you want quality at a bargain price and aren’t snobbish about the name on the tin, there are serious bargains to be had.

Oh, by the way, Mr Dearden is also the talent behind Audient Mixers although to my mind, his DDA desks are superior in just about every respect (and when made cost several times as much).

A compact rack mixer with studio-level performance and versatility!

A powerful mixer with flexible bus and I/O options, plus that quality Mackie touch

NOW YOU CAN RENT, BUY, HIRE OR LEASE

We supply and fulfill the needs of reputable TV/Film production houses, TV stations, Government Bodies, Religious and or / Organizations and Leaning Institutions at reasonable and affordable prices. In Kenya, Uganda Tanzania, Rwanda and Burundi.

Call our offices for